Are you looking for something different for your next cycling trip? Somewhere a little special, off the beaten track and away from the chaingang hordes of Mallorca, Girona and Gran Canaria? In this new series we’ll discover some of the lesser-known cycling destinations, packed full of vibrant culture and wonderful riding, and offering something unique for the adventurous cyclist. We’re starting in one of the hotbeds of Spanish cycling passion. Bilbao, the de facto capital of the Basque Country, is surrounded by green mountains, has a compact and handsome city centre, is frankly bonkers about cycling and is within easy reach of some of the most spectacular and remote riding that the country has to offer. With the Picos de Europa national park to the west and the foothills of the Pyrenees to the east, deserted beaches, deep valleys and mighty forests, the cycling here is as varied as the landscape.
With most people living in the larger cities of the region, the surrounding landscape just calls out for you to get on your bike and discover it. Rather than a city to base oneself in, Bilbao is the gateway to explore further afield. Whether it’s bikepacking or credit card touring, the options are limited only by your imagination. The Picos de Europa, the ‘peaks of Europe’, are a mountain range around 200km west of Bilbao. Once you’re out of the city’s environs the roads quickly become almost completely deserted and offer miles of wonderful cycling on smooth tarmac. Take our advice and take a short 30km train journey from Bilbao’s Abando train station to the small town of Zalla (bikes go free) from where it all becomes a cycling dreamland. You’re still a fair way from the Picos, but the whole region is one big playground just demanding to be explored.
The local roads teem with whippet-thin Basque climbers, all calling out the local “Opa!” greeting as they pass. The riders from the pro ranks who originate from this region give a clue as to the cycling on offer around here – Mikel Landa, Mikel Nieve, the Izagirre brothers, heck the entire Euskadi–Murias squad are the guys you’ll see at the front of the race when the roads start to go up. They’re the guys who are able to hold a conversation on gradients that would have anyone else gasping for breath. Speaking of speaking, so to speak, don’t expect your schoolboy Spanish to get you far in these parts. The Basque language is very different, looking and sounding nothing like that spoken elsewhere in the country. Spattered with the letters H, X, K and Z, it’s tough enough to read let alone say. To add to the confusion, local regions, towns, train stations and even roads often have their local name written and pronounced differently to what’s on the map – but hey, it all adds to the adventure! The Picos themselves are remote, so it’s best to plan your rides well and aim to stay in the larger accommodation centres nearby. Potes, Riaño, Posada de Valdeón and the beach resort of Ribadesella are places for you to pin on a map and link up with some wonderful days out on the bike.

The Basque region is home to pintxos, a kind of tapas crossed with a bar snack. Local cafés and bars have them all lined up temptingly on the counter, allowing you to point out your choice. Costing between 1 and 3 Euros, they’re a cheap way to extend your riding. The menu del día is another option, though here you’re in guesswork territory unless your Basque is on point. For around 13 Euros you can expect a salad, pasta and dessert, often accompanied by a glass of the local produce. 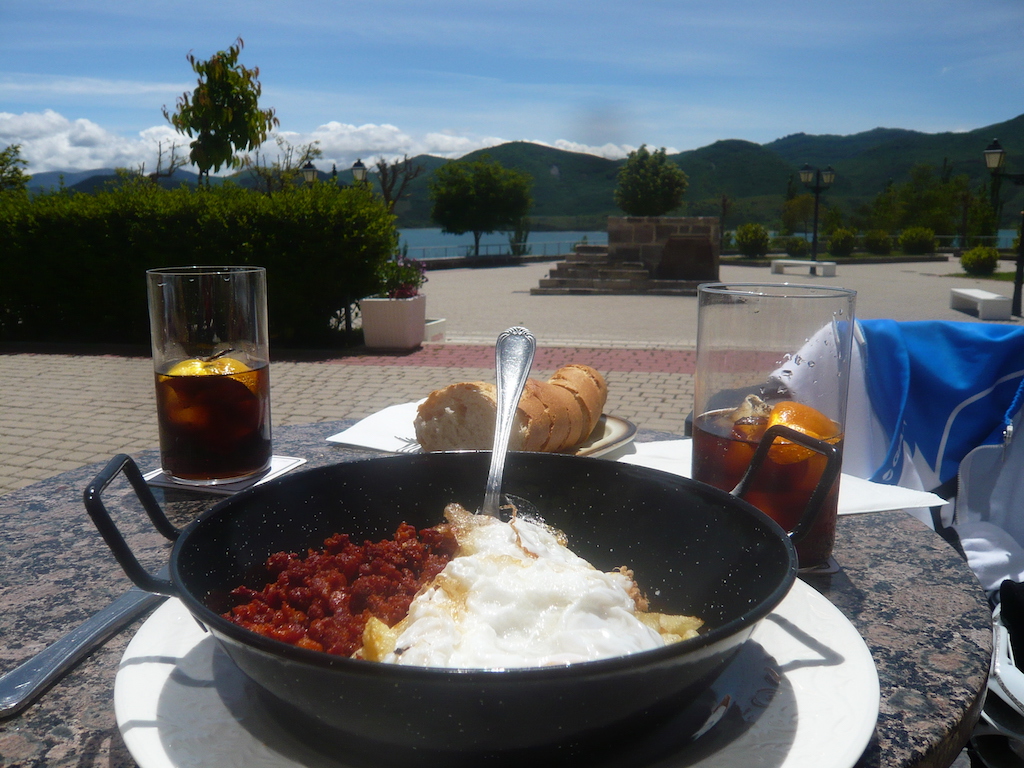 Head east out of Bilbao and you’re into even more isolated country. The riding here is slightly less challenging than the west, with gradients more in the 6-8% territory than the 10%+ found in the Picos, and within a short ride from the city it opens up into verdant green wonderfulness for miles. There are still some fearsome climbs though – each edition of the Vuelta a España uncovers yet more, though the toughest are often dead-end roads up to the fields of wind turbines that dot the peaks.
Ah yes, the wind. Grab yourself a map for a moment. Anywhere south of the main valley between Bilbao and Pamplona and on to the smaller town of Jaca is open and prone to the famous Spanish westerly. Great fun if you’re heading east, slightly more challenging if you’re fighting your way back to Bilbao.
The riding north of the Bilbao-Pamplona valley is truly the hidden gem within this hidden gem, sheltered from the wind and quiet as a mouse. There are seemingly no bad roads in this area, all of them winding their peaceful way across pine-forested peaks and diving into deep valleys. Once you cross into the Navarre region you can say goodbye to everything – it’s just you, your riding buddies and the sounds of nothingness. Ride in the direction of San Sebastián, Tolosa, Ochagavía, Isaba and as far as the almost deserted Valle de Hecho in neighbouring Aragon and you probably won’t want to come back. Well served by airlines from a number of UK airports, it’s a short 90-minute hop across to Bilbao. This beautiful, compact city with breathtaking architecture has a world-class dining scene and a vibrant old town, full of cobbled streets and tiny bars. It’s the perfect spot to take in some local culture and plan ahead or talk through the week you’ve just had over a glass or three of the local Rioja.

Being the hub of the region Bilbao has more than enough accommodation options, from the bling to the basic. For those visiting with bikes, a good bet is one of the airport hotels for your first and last night. They’re usually happy to stash your bike cases while you nip off for a week of exploring.
The airport area is so small that it’s simple enough to return to the terminal and catch the A3247 Bizkaibus for the 30-minute ride into the city, and at 3 Euros it’s a darn sight cheaper than a taxi. If a cab is your preferred choice expect to pay around 30 Euros for the trip.
The Camino de Santiago, a network of pilgrims’ ways leading to the shrine of the apostle Saint James the Great in the cathedral of Santiago de Compostela, cuts east to west across this part of Spain. As a result, even the smallest village is likely to have a hospedería, a hostel originally catering for pilgrims and just as welcoming to weary cyclists in search of rest and recuperation. It’s no trouble to find a selection of places to stay around the region and gently pootle from one to the next.

The Basques have their own word for the soft drizzle that drenches their lush landscapes – txirimiri. Pronounced ‘siri-miri’ it gives a clue that this is not the land of parched plains and sun-soaked beaches. The best time to visit is between June and September, where the temperatures rarely drop below the mid-20s and the Atlantic weather systems are at their weakest.
If you do encounter txirimiri, at this time of year it rarely stays around all day. Take an hour or two off the bike in a local café and it invariably passes on.

Why not eschew the usual on your next cycling trip and explore this wonderful part of Spain. Don’t forget your essential cycling travel insurance and get ready for the ride of your life.