For the next instalment of our Great British Bike Rides series we’re heading to some of the most wild and untamed lands north of the England-Scotland border – the Cairngorms National Park.

With some of the toughest climbs in the UK to conquer, all shrouded in mist and cloud, the Cairngorms isn’t for the faint of heart, nor the fair-weather cyclists. This is a place for those of you looking for one truly epic adventure, the kind that you can recall to excitable grandchildren on a rainy day.

Here are our picks for three of the best bikes rides for you to try from in and around the Cairngorms National Park.

There are a few different ways to make your way north and into the Cairngorms National Park, but none beat a relaxing ride along the Salmon Run cycleway towards Pitlochry – the gateway town to this magnificent part of the UK.

Starting in Dundee, this route follows the National Cycle Route 77 westwards, rolling along traffic-free cycle paths and narrow muddy tracks towards Pitlochry. Along the way it crosses over a number of different terrains, from the flat and expansive farmland in the low-lying Carse of Gowrie, to the lumpy lanes that weave an intricate web through Birnam Wood. It’s after this foray into dense woodland that you’ll find the Beatrix Potter visitor centre and garden, a place worthy of a visit should the sun be shining. Not far on from the visitor centre is the small village of Dunkeld, another idyllic spot deserving of a quick café stop.

From Dunkeld continue to follow Route 77 past the hotel and onto the riverside path. This is the most scenic part of the Salmon Run cycleway and the best chance you’ll get to catch a glimpse of the fish that give this route its name. The lanes here bounce up and down, inducing vertigo as you go. The signs will eventually bring you to Logierait where you’ll cross over a rickety old railway bridge and join Route 7 for the final stretch into Pitlochry. The town, while small, is the unofficial capital of the Cairngorms and acts as a gateway for all those wishing the pass through the heart of this wild and untamed National Park. With two whisky distilleries, the Pitlochry Festival Theatre and the famous fish ladder to discover, you’ll struggle to run out of things to do during your stay.

In all the route from Dundee to Pitlochry encompasses 54 miles (87km) of largely traffic-free cycle paths and quiet country lanes, throwing in a few short, sharp climbs in the latter third for good measure. It’s the perfect route for aspiring bikepackers and cycle tourists looking to go on to tackle the harder, wilder lands further north in the heart of the Cairngorms.

For what the Cairngorms lacks in paved public roads, it more than makes up for it with miles upon miles of awesome single-track and mountain bike trails. This loop around Loch an Eilein is the ideal choice for those looking to enjoy an adventurous day out on the trails with the family in tow.

Due south of the town of Aviemore lies the Rothiemurchus woodland estate, an area renowned locally for its fantastic mountain bike trails and scenic, loch-side views. There’s no pre-designated route to take, once you make it to the estate just follow whichever trail you feel like and forge your own mini adventure. Most of the paths are suitable for beginner cyclists, compacted earth and fallen pine needles making up the majority of the surface in this woodland estate.

There are a few rocky trails to negotiate, but nothing too tough to deem it a route for intermediate and expert-level mountain bikers. This makes it a perfect place to bring the kids, especially if they’re new to cycling and still learning the ropes.

Remember to pack a picnic too; there’s no better place to tuck into a sandwich than against the backdrop of the picturesque Loch an Eilein. Keep your eyes peeled for the ruined castle that lies on a small island to the north of the loch, it’s one of the best opportunities for a candid photo of this beautiful area.

Through the heart of the Cairngorms, Pitlochry to Tomintoul

This route through the heart of the Cairngorms tackles both the highest and second highest public paved roads in Scotland, making it one of the toughest rides north of the border.

Starting from the small town of Pitlochry, this route travels east through the Kindrogan forest before snaking its way north along the A93, a relatively quiet road that cuts its way through the heart of the Cairngorms.

The first significant climb of the day, the Cairnwell Pass, appears just before the midway point of this 71 mile (115km) route, right after you tiptoe under the two foreboding mountain passes that flank the entrance to the Spittal of Glenshee. The road follows the path of least resistance through the deeply gouged valley for the most part, but as you ride further north you’ll begin to see the road slowly ramp ahead of you.

The gradients are tame at first, but they soon clamber up to a lung-busting 12% for the final 2km of the climb. The summit of this climb is marked by the Glenshee Ski Centre, an ideal refuge point should the winds be howling or the rains pouring – this is, after all, the highest elevation of the day at 670m.

If the weather is kind, continue following the A93 down a long and fast descent towards Braemar. It’s a small village but lying at the centre of the Cairngorms it acts as a bustling hub for weary hikers, cyclists and even motorists to fuel up and replenish their energies.

From Braemer the route continues along the A93 until it reaches the tiny village of Crathie where it then takes one of its first turns of the day, onto the B976. Crathie Hill begins in earnest, the road climbing as soon as you take the turn. The first half of this 6km-long climb is sheltered from the elements by a thick tree canopy; it’s here where the toughest gradients of 10-12% can be found. The latter half rolls along the top of a sombre moor, each blind summit marked by a crudely built cairn. 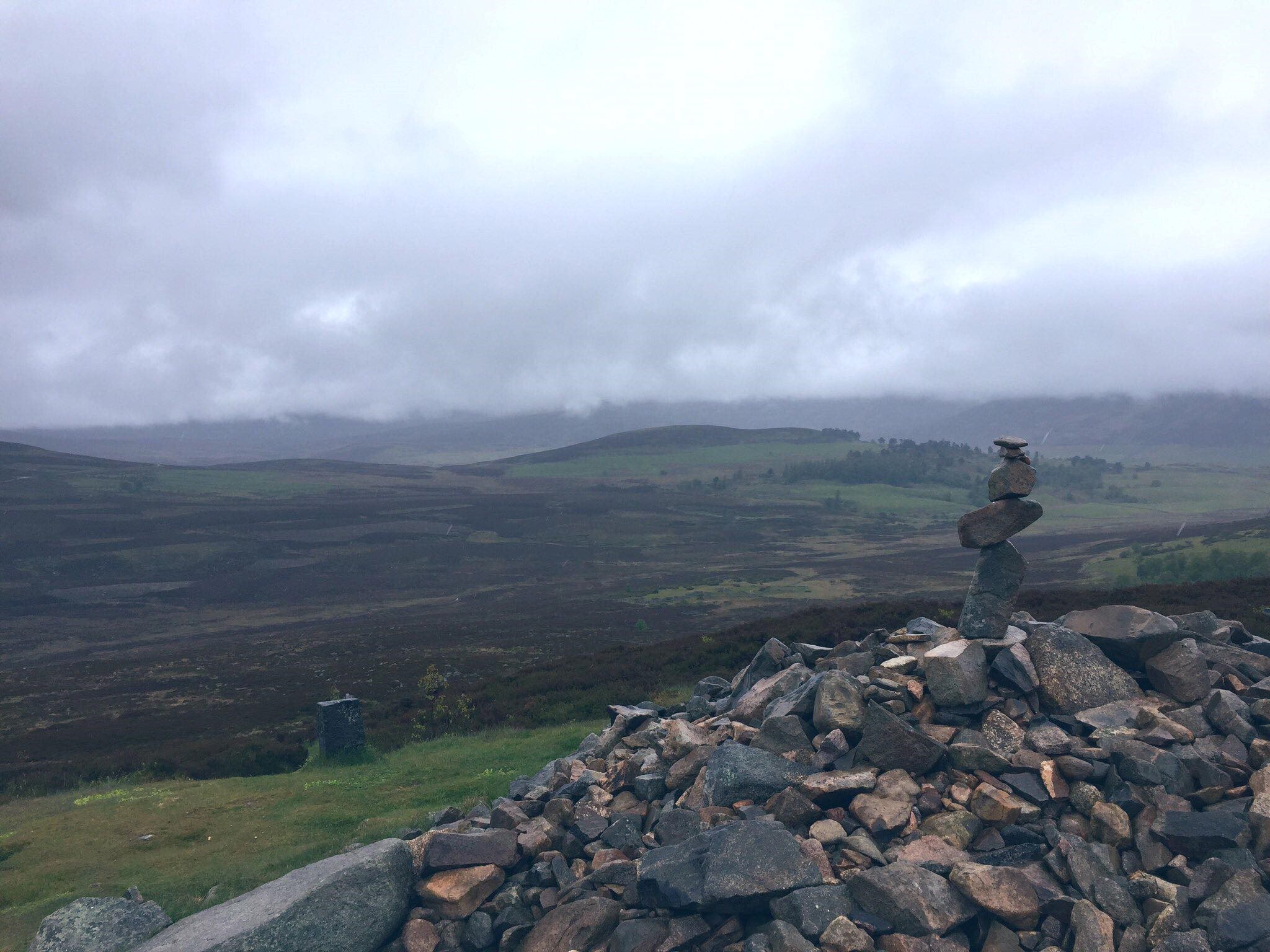 Follow the descent until you reach the junction that crosses the River Gairn. Take the left turn and begin the penultimate climb of the day, the south side of Gairnshiel. The first kilometre of this 6km-long climb is agonisingly steep, 15% average, but once over this hurdle you can settle into a nice rhythm on the remaining 4% ramps.

It would be wise to save as much energy as you can on this climb, because after a quick descent you’ll arrive in Cock Bridge – a tiny hamlet village that marks the start of the cruellest climb of the day. The Lecht begins once you pass the beautiful Corgarff Castle and instantly slaps you in the face with vicious 20% slopes. It doesn’t ease up until you’ve ground your way past the 1.2km mark, where it then suddenly plateaus for a short while on top of a bleak and exposed moor. After a brief but very welcome descent, the climbing starts again, this time at a more ‘manageable’ gradient of 12%. Once you pass the Lecht Ski Centre you can breathe a sigh of relief, the climb is over and only a peaceful, flowing descent lies between you and the finish in the tiny town of Tomintoul. There’s not a lot to see in this small outpost town, but that does nothing to take away from its welcoming charm, especially after a long hard day in the saddle. If you’re planning an overnight stop, look no further than The Smugglers Hostel, it has got everything a weary cycle tourist could ever want or need.

Words and images by Will Newton

Keep an eye out for the next in our series on great British bike rides. Until then, why not check out our cycling travel insurance and get planning your cycling trip to the wild and untamed landscapes that litter the Cairngorms National Park.