Mental health in lockdown and how cycling can help

With the onset of the pandemic last year, the last twelve months have seen a meteoric rise in mental health issues in Britain. After repeated lockdowns and restrictions, the Office of National Statistics released stats that suggest one in five adults are now likely to be experiencing some form of depression, with one in eight developing severe depressive symptoms. To put this into perspective, this is double the number of people self-reporting depressive symptoms in 2019.

The awareness of common mental illnesses such as depression or anxiety have been in the public eye more and more in the past few years, but many cases go undiagnosed or do not receive treatment. In fact, referrals to mental health services last April were down by 57% compared to April 2019. But with more adults suffering from symptoms of depression and anxiety, it’s no longer a distant issue affecting a minority. Many of us have had to stare it in the face during the unnerving and isolating experience of the pandemic.

It’s well reported that cycling – and any other forms of exercise – can have a positive impact on the symptoms of mental ill health, so we spoke to a number of riders who have used cycling during lockdown to look after their mental health as well as sport and exercise psychologist James Beale from the University of East London to provide some scientific evidence.

Seated at our virtual roundtable are:

James Beale: sports and exercise psychologist working at the University of East London. He has conducted research into cycling and the psychological benefits of riding outdoors.

Rollo Dixon: lives on the Isle of Wight and is currently enjoying Zwift as a way to connect socially with ride buddies in place of real-world group rides.

Andy McAteer: works as a buyer in the cycle trade and rides daily in Lancashire. He likes to challenge himself on the road and on gravel.

Steve Wood: Nottinghamshire-based project manager working in the water industry. He normally trains outdoors all year round but has recently bought a turbo trainer so he can train at home.

The impact of lockdown

It’s no surprise that the restriction of liberties and social activities has led to a rise in mental health issues. Robert Booth, a freelance sound recordist, describes the impact it’s had on his own mental wellbeing.

“During this lockdown my mental health has suffered a little due to the very strict nature of not really being able to see friends freely. Due to the lull in my freelance work at this time of year, even getting out of the house and talking to people through my professional career has taken its toll.”

The lack of socialising outside the home is a concern shared by Andy McAteer in Chorley.

“I’ve started to struggle in this third lockdown with the lack of social interaction and seeing people. Working from home has possibly made it harder as again, I haven’t really seen anyone in person. I’ve definitely been going to bed earlier as there’s no reason to stay up, I’m not going out and TV is rubbish.”

Sport and exercise psychologist James Beale explains that “lockdown represents a huge psychological challenge for almost everyone, some are suffering the impact of isolation while others have the opposite where the chance of alone time is very limited.”

Escape your headspace, ride your bike

Whether you’re alone or living with others, staying at home for most of the time has been an incredible change to normal societal circumstances. What appears to affect people the most is the lost socialising, travel, and doing things they enjoy away from the home.

Robert Booth is convinced his mental health has changed since before lockdown: “The additional pressures of having to wear a mask and use sanitiser constantly adds a level of anxiety to every trip and interaction for fear of catching and spreading the virus in a very invisible way.”

Even professional cyclists have had to make adjustments during lockdown, as Andy Turner from Swift Carbon Pro Cycling explains, “It’s been an interesting one. Because I mainly ride for the sake of racing and racing hasn’t been happening, riding has felt a little purposeless. But being able to get out of the house and exercise has been helpful. It’s difficult when the weather isn’t good but even then, keeping fit and healthy on the turbo is a good alternative.”

For some, riding can be a saviour from the monotony, particularly if you find yourself furloughed. For others, cycling is seen as a chance to maintain a semblance of normality, and as psychologist James Beale explains, is a fantastic way of escaping your own head.

“Exercise has a positive impact on a number of things that appear to be strongly related to mental illness. Rumination is widely recognised as being related to mental ill health conditions. Exercise generally, and especially cycling, encourages people away from an internal world and into the present. The terrain, others speaking to you, a nice view that suddenly comes into sight are all mechanisms that, temporarily at least, encourage cyclists away from an internal world and into a more psychologically healthy world.”

This isn’t to say that cycling is a magic pill that will cure mental illness. However, the benefits of cycling and other forms of aerobic exercise on the most common forms of mental illness have been proven.

A sense of normality in an abnormal situation

As a professional buyer in the cycle trade, Andy McAteer has been working from home since last year and agrees that fresh air and being able to get out on his bike within lockdown conditions has been helpful for his mental wellbeing.

“Being able to get outside has been a massive bonus and getting on the bike has felt like one of the most normal things to do. Being allowed to meet up, under guidance, was also great during summer. It was something to look forward to and plan for. Zwift has also been a huge benefit with the local club organising rides and races. It’s not the same as riding together in person but it’s the best we can do at the moment.”

Whether you ride indoors or out, cycling can help you take your mind off the doom and gloom of the world, which Robert Booth agrees with.

“Cycling gives me a target or goal to work towards when there seems to be little else to motivate me,” says Robert Booth, “especially given the relative lack of work in my sector due to the restrictions. It also helps by giving my brain a break from screens, social media and negative news that seems to be plaguing the internet right now.”

Meet me in Watopia? 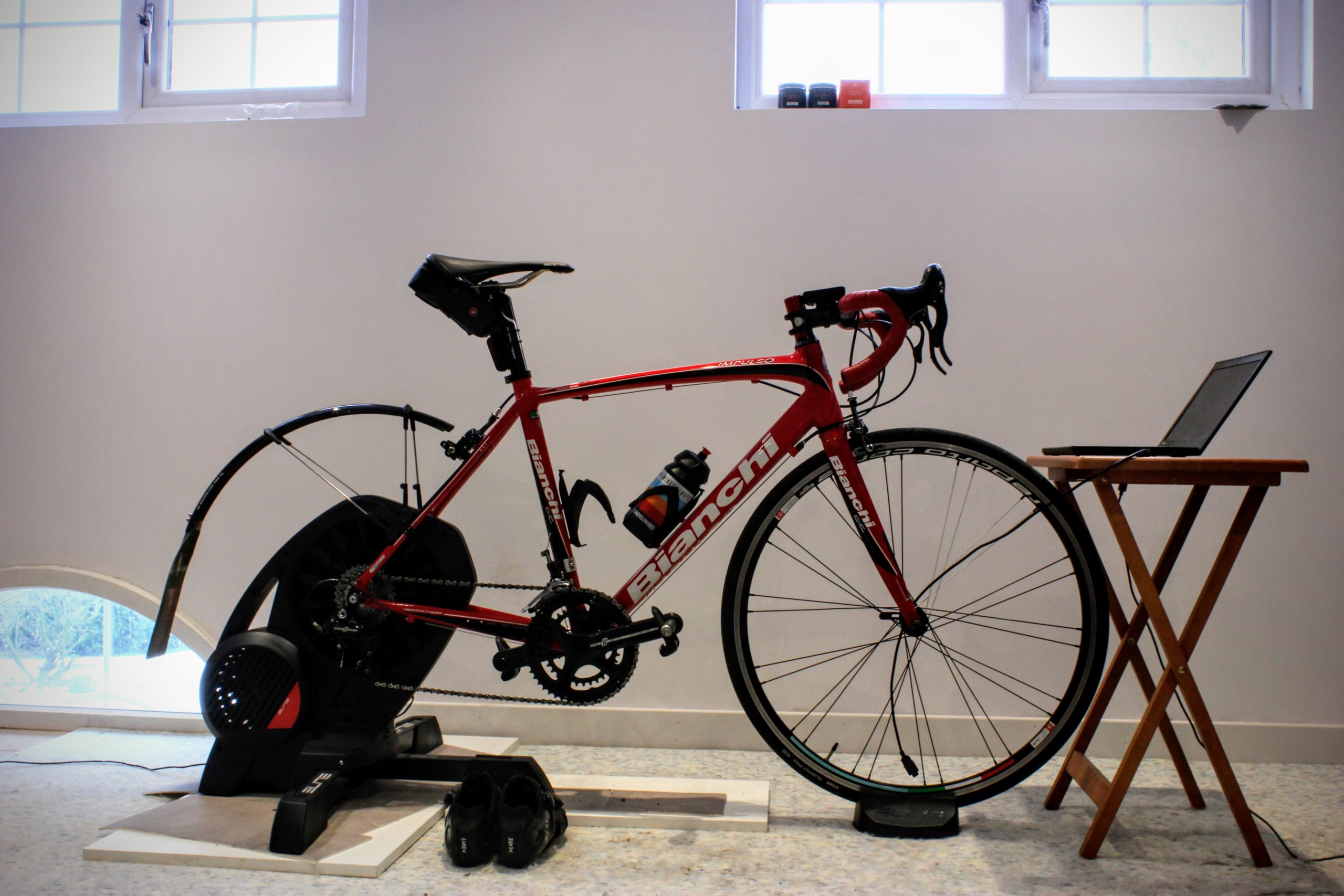 With the current lockdown residing over the worst weather of the year, Zwift has played an important role in not only keeping people riding, but enabling them to socialise outside of their immediate household. Isle of Wight-based Rollo Dixon shared his thoughts.

“In lockdown I have expanded my time on Zwift to train as well as take part in group rides and races, including the ‘Tour de Zwift’ and the ‘Donny Chaingang’. I’ve also been able to do social rides with my brother who lives a couple of hours away, which is something we would otherwise only do a couple of times a year. This has helped with both the withdrawal symptoms from a lack of social interaction and given me a competitive outlet as there is something to look forward to each week.”

The social aspect of Zwift and online riding is enhanced by additional features such as talking via Discord or on the phone. The social aspect of cycling in groups may be lacking, but virtually it’s possible to maintain some level of human contact. For others, Zwift and indoor training is another way for them to continue exercising without any additional risk of exposure to the virus.

“Traditionally I’ve ridden outdoors all year round,” shares Steve Wood, Nottinghamshire-based project manager, “but with the impact of Covid and the increasing number of people seeking outdoor exercise, I made the decision to invest in a smart trainer to lower my exposure and help prevent the spread. Overall, my motivation and enthusiasm for cycling has increased, allowing me to de-stress and unwind following a busy day at work leaving my mind clear ready for what the next day throws at me.”

Boost your mood with ‘green cycling’

Having said that, once the ice has cleared and the mercury rises, there are many reasons you should consider riding outdoors if you can (and if you feel safe doing so), particularly in the countryside. As part of his research at the University of East London, James Beale discovered there are many psychological benefits to cycling in the countryside, sometimes referred to as ‘green cycling’.

“In our research Oli Glackin and myself introduce the term ‘green cycling’ where cycling within the countryside appears to afford a number of benefits which are highly relevant now. To summarise these, confidence is often enhanced through overcoming challenges that cycling frequently presents. There is a psychological restorative effect from green cycling and cyclists that cycle in groups felt they had the option of being connected with the group if they wanted to but also allowed with being judged to be alone and immersed within the environment. The concept of ‘alone but connected’ while cycling within groups seems very relevant within pandemic.”

If you’re interested in reading more about James Beale’s work at the University of East London, click here.

Fresh air as a treatment for stress and mental wellbeing

For some, cycling is not the only way they’ve been keeping their mental wellbeing in check during lockdown. Walking has become a popular pastime as people seek solace in nature and a change of scenery from the endless days of endless sitting in front of screens at home.

“Being outside and taking the dog for a walk has been a massive bonus,” adds Andy McAteer, “and with a park behind our house, it’s great to go in an evening when the crowds have gone and you have the place to yourself.”

Others have turned to more specific mental training resources, such as Mindbox and Headspace.

Robert Booth shares, “I have been trying to use breathing and meditation practices, along with yoga and regular stretching to help my body and mind feel as fresh and free as possible. Being aware of and being able to control my breathing has helped everything from cycling performance, recovery, and has helped me clear my head in times of stress and high anxiety.”

With the pandemic far from over, it’s imperative we discover our own way of coping with the additional stress and anxiety a lockdown can force upon us. Cycling can be a fantastic way to escape even temporarily as you focus on the next climb or the next virtual Volcano KOM. With mental health issues coming to the forefront more than ever, take some time to find what works for you to keep your wellbeing in check.

If you’re riding outside this lockdown, make sure you’re insured against accidental injury or damage with our world-class home and bicycle insurance.

If you’re struggling with your mental health during lockdown there are a number of resources available to you here.