For the next instalment of our Great British Bike Rides series, we’re dipping our toes into a truly accessible challenge. Britain’s geography naturally encourages adventures from one coast to the other and with the Irish and North Sea only separated by 80 miles at the narrowest point (as the crow flies), a ride from the northwest coast to the northeast is one that is realistically achievable for any fit rider. Whether ridden as a single challenge or spread over two or three more leisurely days, a coast to coast ride is a significant undertaking offering access to some wonderful parts of the country.

Spend any time cycling in the UK and you’ll soon become one of an army of two-wheeled meteorological experts. The predominant wind direction is from west to east and as such most riders choose the easterly route.

The logistics of a point-to-point ride can be complex but the three routes on offer here have good train connections so that you can forget the car, though it’s always worth reserving to confirm a spot for your bike. Let’s head to the narrow waist of the UK and see how much we can pack in.

The official signed C2C offers a choice of start and finish points with a number of different itineraries available. They’re well signposted and offer a great introduction to touring for those heading out on their first multi-day ride. Starting in either Whitehaven or Workington and finishing in Sunderland or Newcastle, the C2C offers a real challenge that most people aim to complete in two to three days. Train services to and from the start and finish points are good.

The ride presents a significant challenge for experienced riders too, with some even completing the 220km distance in one day. If you do go for the more laid-back option, bear in mind it is a very popular ride, so pre-booking accommodation is a must. Starting in the wilds of Cumbrian coast, you initially wiggle your way through the glorious Lake District. You’re never far from a good café round these parts, which you may be thankful for should the weather turn – it can be a touch wet in the Lakes so be prepared. Spend the first night in a B&B around Penrith and you’ll have clocked up a respectable 100km and 1,500m of climbing for your day out. Our recommendation is the pretty village of Langwathby a few miles beyond Penrith – the village pub grub is well worth the extra effort.

From Penrith to the second traditional stop at Allenheads is only 45km but with the ascent of the 580-metre Hartside Summit not long after your bacon butties this is a day to take at a leisurely pace. After Hartside it’s a rolling ride to the small village of Alston, a great lunch stop, and onwards to the next night’s rest. This sector is where you really get to experience the wilderness that attracts so many to this ride – keeping a long way from big towns or even small villages, you can pass miles in your own company. From here on there are a few more route options available, including some traffic-free sections and tough climbs, with some spectacular views east all the way to the sea from the highest points when it’s clear. Finish in Sunderland or, even better, by the abbey at Tynemouth while tucking into some freshly caught fish and chips and you can congratulate yourself on a job well done.

Way of the Roses

The Way of the Roses is a predominantly road-focussed 275km ride beginning in Morecambe beside the statue of good old Eric and ending among the kiss-me-quick crowds of Bridlington on the Yorkshire coast. It’s a ride of two halves: the first half brutally hilly in parts, the second flat as a proverbial pancake. A fully signposted route, it’s another one for those trying out multi-day rides and testing their touring legs, normally completed in two days.

Morecambe is no longer served by rail, so should that be how you wish to access the area Lancaster is the closest you can get. However, the 20km ride along the River Lune and across to the promenade is a pleasant way to warm up. You’ll then turn around and retrace your route before following the River Lune eastwards and into the lumps of North Yorkshire. Ensure you have suitable gearing, for some of these climbs will test even the strongest rider: the gradients out of Settle top 15% for a significant distance. Fair warning to those tempted to lunch in this lovely spot.

Ripon, one of the country’s smallest cities and home to a striking cathedral and the crumbling ruins of Fountains Abbey, makes a good halfway point to stop for the night. Be sure to head to the Market Square at 9pm for some real history: the Wake Man blows loudly on his horn at each of the four corners, signalling the start to his traditional duties where he patrols the streets in the hours of darkness, as he has done every single night since 886 AD. 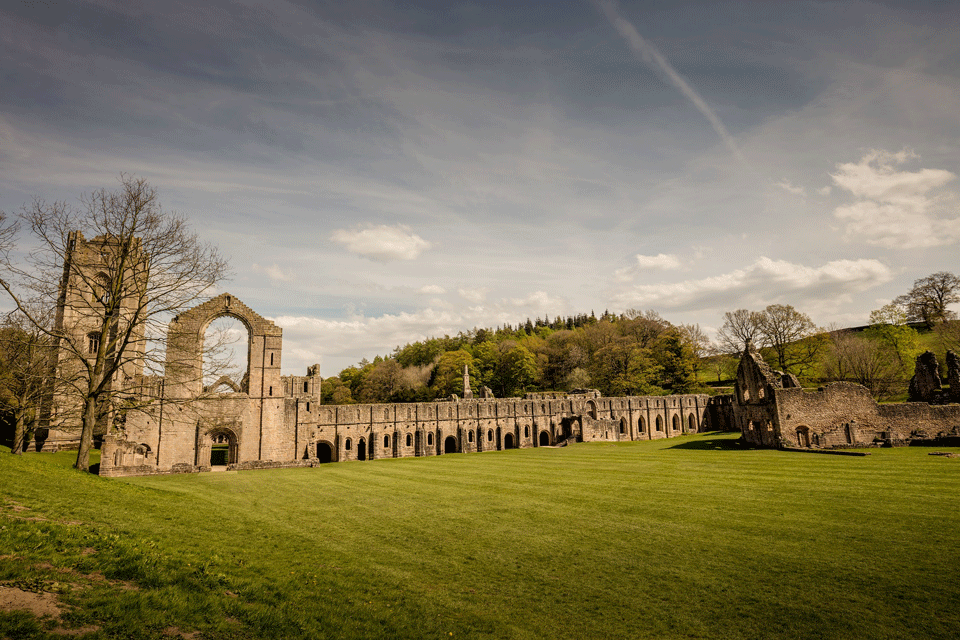 From Ripon east is a much flatter ride through to York and onwards towards the North Sea. After the first day’s efforts you’ll probably be grateful for some easier roads and there are plenty of fish and chip outlets in Bridlington to provide the carrot should the motivation falter. Train services from Bridlington are good, connecting back through Hull to the wider UK rail network. At 200km this route is achievable in a single day for stronger riders, with the start and finish being well served by train services from early morning to late at night.  A word to the wise though – Scarborough is a favourite with stag and hen do crowds, so be prepared for some hilarious* banter as you sit in your lycra among the L-plated hordes on the way home should it be a weekend.

The first part of the route follows the Way of the Roses, heading east along the River Lune from Lancaster. You soon head further north though, past Ingleton, home to some spectacular waterfalls and alongside the mighty Ribblehead Viaduct, deep into the Yorkshire Dales through Hawes. Flat is a word used to describe headwear in these parts, not roads. Be prepared for a lot of climbing.

On through to Thirsk this ride skirts the larger population centres, so it’s a ride where you can enjoy miles of uninterrupted pootling. A tough challenge awaits past Thirsk – Sutton Bank, so steep that trucks are not permitted to use it (though some drivers will still try), featured in 2018’s Tour de Yorkshire and will test you with 130km in your legs.

Pushing on through Pickering, the last hour or so is along the A170 – a fairly busy main road, so keep your wits about you. Dropping into Scarborough and down to the beach aiming straight for the ice cream sellers, is a great way to finish the ride. Give yourself a pat on the back and watch the waves a while – you deserve it.